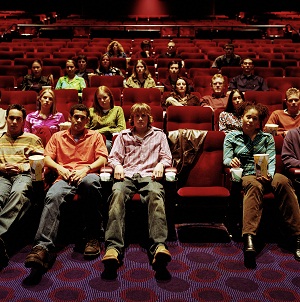 Advertisements comprise thirty percent of the material aired on television, and many of us will view more than two million commercials in our lifetimes.  The A. C. Nielson Company reports that, by the age of sixty-five, the average U.S. citizen will have spent nine years of their life watching television—twenty-eight hours a week, two months a year. And in one year, the average youth will spend nearly twice as many hours in front of the tube (fifteen hundred hours) as they spend at school (nine hundred hours).[1] We may turn the box off eventually, but the advertisements remain. We are surrounded by them: they cover billboards, cereal boxes, food wrappers, bathroom stalls, tee shirts, and tennis shoes. They seep into our music, our newscasts, and our conversations. We recognize corporate logos and hum jingles (“Ba Da Ba Ba Ba”). In short, advertisements inform every aspect of our lives. Yet we often give them very little thought. We may make aesthetic judgments about them (e.g., “That commercial was funny” or “That commercial was stupid”) or view them as innocent means to purchasing ends, but we rarely acknowledge them as messages that require critical attention.

Advertisements, however, do more than entertain and sell more than just products. They suggest standards of normalcy, of coolness, of sexiness, of happiness, and so on—standards that shape the way that we view and interpret the world.  They also serve the profit-driven interests of the corporations that create them. As cultural critic Naomi Klein explains, “Quite simply, every company with a powerful brand is attempting to develop a relationship with consumers that resonates so completely with their sense of self that they will aspire, or at least consent, to be serfs under these feudal brandlords” (149). [2]  In other words, advertisements are hardly innocent means to purchasing ends and, more often than not, hardly true reflections of our senses of self. Instead, they are a powerful force in creating our senses of self. Therefore, advertisements do require a critical eye.

Whenever you analyze an ad, it may be useful to ask yourself some questions: