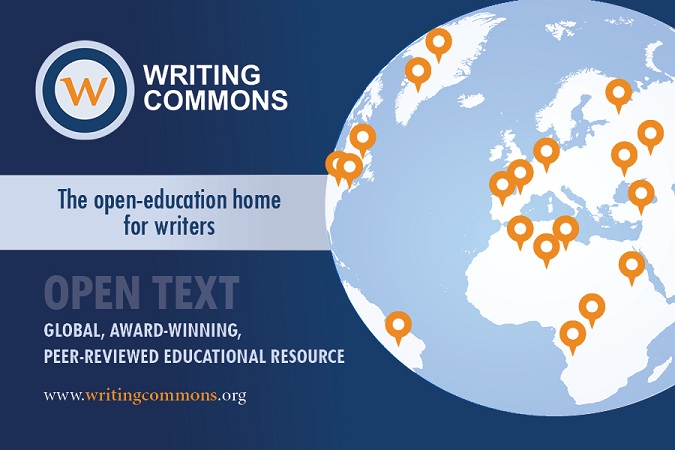 What is Writing Commons: 4th Edition?

Writing Commons is used by students in a variety of undergraduate writing courses, including Composition, Creative Writing, and Workplace Writing (including Professional Writing, Business Writing, Technical Writing, and Writing in STEM).

We are a community of writers, teachers, and researchers who are passionate about helping students and aspiring writers. We are practitioners (aka scholars and teachers) in Writing Studies, an interdisciplinary academic field.

We publish original articles on matters of interest to writers, speakers, and knowledge workers across academic, professional, and business contexts.

Over the years, our mission and sense of audience has evolved:

Over 17 years, our project evolved in ways our original menu system hadn’t originally anticipated. With the first two editions, we were a composition textbook for first-year writing. The 3rd edition branched out to fiction and professional and technical writing. This led to the fragmentation of content. For instance, we had sorted articles on audience awareness in course folders; discipline folders (e.g., technical writing, business writing, expository writing); and rhetoric folders.

On reflection, we realized the 3rd Edition was more than disorganized. We realized, in fact, that we had created the House of Lore that Stephen North satirized in The Making of Knowledge in Composition to define lore and differentiate lore from other forms of knowledge.

“The House of Lore, as it were: a rambling, to my mind delightful old manse, wing branching off from wing, addition tacked to addition, in all sorts of materials–brick, wood, canvas, sheet metal, cardboard–with turrets and gables, minarets and spires, spiral staircases, rope ladders, pitons, dungeons, secret passageways–all seemingly random, yet all connected. Each generation of Practioners inherits this pile from the one before, is ushered around some of what there is, and then, it its turn, adds its own touches. Naturally, the structure is huge, sprawling. There are, after all, no provisions for tearing any of it down. Various portions of it can and almost certainly will be forgotten and rediscovered again and again. A wing abandoned by one generation will be resettled (and may be refurbished) by another. And note, too, that there is nothing to rule out parallel discovery or re-invention, either; so the House of Lore has many rooms that look very much alike.”

In 2020 Moxley realized we could continue as we were, adding new content and revising and editing existing content, as necessary. Or we could detonate our house of lore—raze it to the ground and start over.

Frankly, Moxley would have walked if not for Google Analytics.

On a daily basis, he was encouraged by our global traffic. As the earth spun around the sun, from our perspective in Eastern Standard Time, we could see patterns: evening readers from Asia; early morning readers from Europe. At any time of day, we could see there was always someone reading Writing Commons. On occasion, large crowds gathered.

Thanks to Google Analytics, Moxley decided to double down our effort.

The 3rd edition was published between 2012 and 2019 at https://writingcommons.org. The 3rd edition began as a modest, open-access educational resource for students and teachers of college-level writing courses, emerging from two previously published editions of College Writing Online.

At the onset, we aspired to provide the best possible composition textbook for first-year writing students — for free. Frankly, this remains a motivating factor as conventional educational resources continue to drive up costs for students, with The College Board estimating an annual cost of $1200 for textbooks and supplies in the 2019-2020 school year (College Board 2020).

Further inspired by Yochai Benkler’s (2006) work on commons-based peer production as well as the emergence of Wikipedia, we modeled the 3rd Edition after a typical academic genre: the academic journal. We created an Advisory Board and an Editorial Board and invited faculty and graduate students to submit pedagogical articles.

In 2014, after hackers attacked and took over the site in 2014 and we had to fight to reboot a new version of the site, we began incorporating ads. The ads enabled us to better fund security and server costs.

Quentin Vieregge, the Editor-in-Chief for Writing Commons between 2011 and 2017, worked with our Advisory Board and Editorial Board to

For a brief while, we piloted My Campuses. Led by Kate Pantelides, this was an effort to showcase student work. Participating schools were Malmö University, Eastern Michigan University, and the University of South Florida.

Thanks to the hard work of our review editors and advisory committee, the 3rd edition doubled the size of Writing Commons. We peer reviewed many submissions and published original works from university and college faculty and graduate students related to fiction, creative nonfiction, business writing, scientific writing, and technical writing. We were used by the first English composition MOOCs, sponsored by the Gates Foundation, Duke University, Georgia Tech, and the Ohio State University.

The 2nd edition was published as College Writing Online from 2008 to 2012.

Published in Joomla, a content management system, the 2nd edition was written primarily as a resource for students in college composition courses.

The 1st edition of Writing Commons was published in 2003 by Pearson Education under the title College Writing Online. This was the first solely online composition textbook for first-year writing students. It was awarded the 2003 Distinguished Book Award from Computers and Composition.

Quentin Vieregge, UW-Eau Claire, led the effort to develop the third edition.
Under Quentin’s leadership we focused more broadly on the needs of students in professional and technical writing courses. As Editor-in-Chief until 2018, Quentin oversaw the editorial process, working with our review editors to conduct anonymous reviews of hundreds of essays.

Likewise, we thank our colleagues for their professional service as our review editors:

Our thanks to Joe Opiela for serving as our editor for the first iteration of this text, which was published by Pearson Education.