MLA Citation refers to conventions for citing sources according to MLA Handbook, 9th Edition. Even if you plan to use an MLA Format Citation Generator, you can benefit from understanding the basics of MLA citation. Being conversant in MLA in text citation is a basic literacy in the knowledge economy. 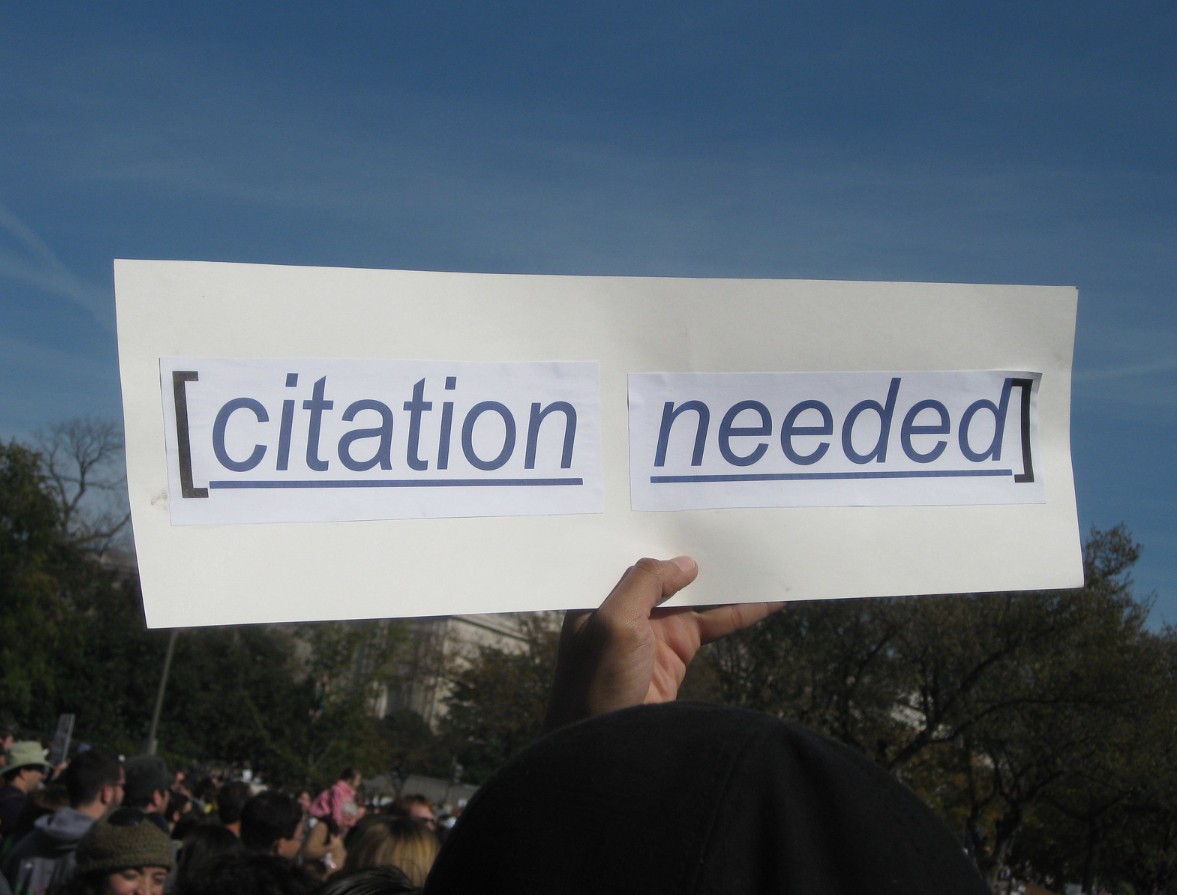 "'Citation needed'" by futureatlas.com is licensed under CC BY 2.0.

What is MLA Citation?

MLA Citation refers to the guidelines for citing sources according to the MLA Handbook, 9th Edition.

In Text Citation
See the article below to explore creative ways to introduce and vet sources inside the body of your paper in MLA citation style.

MLA Citation is also known as

Why Does MLA Citation Matter?

Writers, speakers, and knowledge workers in humanities-related disciplines use MLA Citation to acknowledge when they are

Words matter. Ideas matter. People want to be acknowledged when others use their ideas, whether those ideas are expressed in conversations or texts.

Words are a form of intellectual property, and they are governed by copyright. Failure to cite sources and acknowledge the ideas of others is called plagiarism. Acts of plagiarism are a violation of ethics and integrity.

Correct MLA In text citation is a signal of professionalism across workplace and academic contexts. Lack of correct usage suggests a failure to attend to detail or a lack of respect of intellectual property and copyright policies, conventions, and laws.

Beyond being required by law and academic policies governing academic honesty and integrity, MLA citation matters

Even if you use an MLA Format Citation Generator to compile a Works Cited page, you still need to know how to introduce sources into the body of your text in ways that support rather than weaken your thesis, research question, hypothesis.

The MLA Handbook, 9th Edition provides a number of different ways to format in text citations, depending on the bibliographical information available about the source.

Most generally, a standard MLA in text citation typically includes

Note: Unlike APA’s or Chicago’s author-date system, MLA does not provide the date of publication along with the author’s name inside the parentheses. Most likely MLA excludes the date reference because writers using MLA are often citing literary classics, which are often reprinted on various dates by multiple publishers.

This lack of a date in the parenthetical citations in MLA puts a bit of pressure on the writer to clarify the dates of publications when that’s important information for the reader to have. This rhetorical situation often comes up because writers are often articulating how ideas evolve over time thanks to ongoing investigations, ongoing scholarly conversations.

If you were quoting or paraphrasing from this source,

You have multiple ways to introduce sources:

In the beginning of a sentence

At the end of a sentence

Sometimes it can feel intrusive to introduce an author by first or last name in a text. You will have occasions when you want to put the author — or sometimes multiple authors — at the end of a sentence.

MLA style suggests that you include both the first and last name of the author when you first mention the source it in your paper.

Thus, rather than the above, on first mention the following might be more appropriate:

Sometimes it makes sense to establish the credibility of a source when it is introduced into a text. Qualifications can be addressed succinctly. For instance, to continue the example from above, the following might work:

Sometimes, when composing a text, you may feel that it’s a bit intrusive to keep introducing sources by listing first and last names. Sometimes you may want to keep the flow of the sentence on another subject other than the first and last name of a source’s creator. In that instance you can follow this template:

Because many sources have more than one author and no page numbers (particularly electronic sources), the basic format discussed above won’t always work. See the chart below for common templates for MLA in text citations.

**The same rules apply to summary and paraphrase. You should introduce your sources and cite them even if you are not using their exact language.

The criteria for evaluating in text citations may vary across academic and professional disciplines. Below are some commonplace rhetorical moves writers make when introducing sources or putting sources in conversation with one another.

Look at the sentences below, each of which contains an incorrectly formatted in-text citation. Identify the errors in each.

The first step to finding appropriate sources is to reflect on your information needs.

During the preliminary stages of a writing project, when you’re engaged in prewriting, drafting, and rhetorical reasoning, take a moment to reflect on what’s been published about a topic in the archive. Here be careful to make distinctions in the authority of available information.

How to Identify Needed Information

Before you cite a text, be sure to critique it.

When you first introduce a source, MLA recommends that you put the first and last name of the author in the sentence:

When writing about non-fiction, tell your readers where the information came from. Where was it published? Who wrote it? What makes the writer credible?

In subsequent uses of the same source, you don’t have to fully introduce your source, but you still need to contextualize the quote for your reader.

When writing about literature, tell your readers who is speaking to whom about what. Orient them to what is happening in the story.

Step 4: Integrate Your Source into Your Text

When using direct evidence in academic essays, writers shouldn’t ever start a sentence with a quote. Instead, the quote should be smoothly integrated into your sentence. There are three methods for embedding sources:

Introduction with a colon:

When incorporating quotes from outside sources, it’s important to quote the language of the original source exactly. However, sometimes quotes need to be adapted for space or clarity. When making adaptations it is essential that

1) the changes are noted using brackets or ellipses

At times, quotes will need to be adapted by pronouns to more specific nouns or vice versa for clarity or to avoid redundancy.

Particularly when integrating narratively, it might also be necessary to change verb tense to conform with the grammar of your sentences.

Finally, you may find that you want to omit non-essential information from the middle of a quote. In these cases, use ellipses (…) to note where content has been omitted. Use three dots for brief omissions, and four dots if a sentence or more has been removed.

It’s important to note that you shouldn’t ever use ellipses to note when something has been removed at the start or end of a quote. Except in the unlikely event that you are quoting the very first or very last line of a text, readers can always assume that something preceded or followed quoted material, so ellipses to start or end a quote are superfluous.

As explained in detail above, the last step when incorporating outside evidence is to credit the original source via citation. Remember to include the first item listed in the bibliographic entry (author’s last name or source title) along with a page number if there is one.