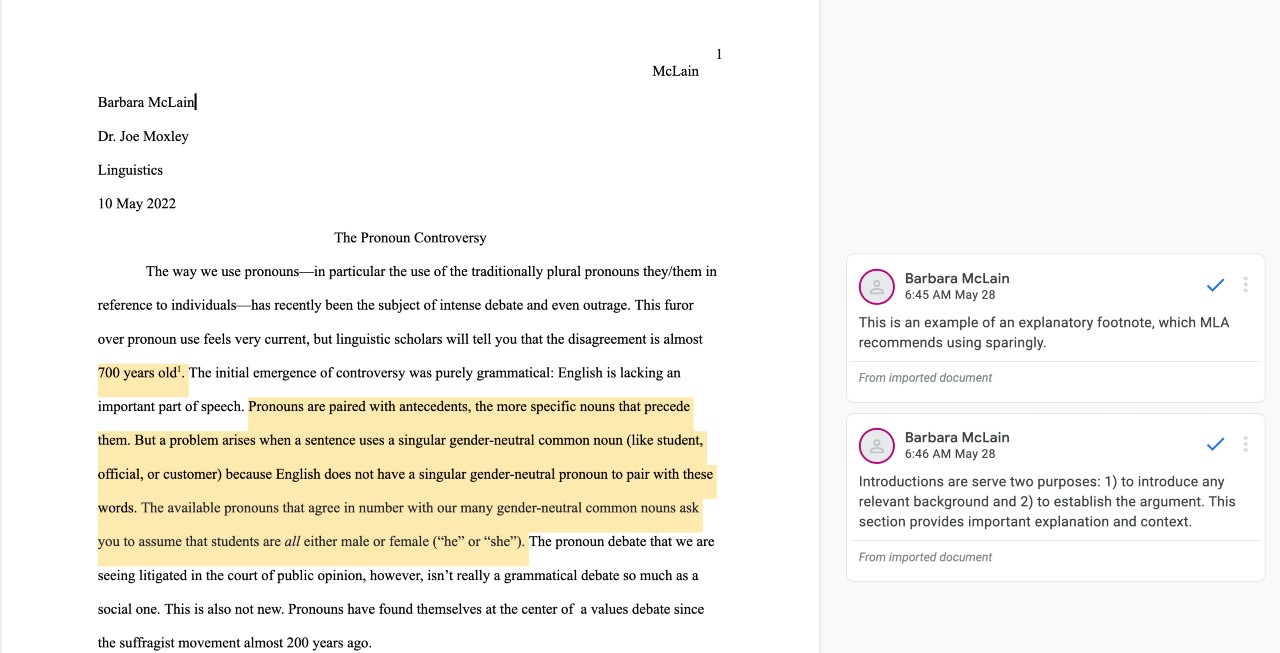 Below is a sample essay in MLA format.

The way we use pronouns—in particular the use of the traditionally plural pronouns they/them in reference to individuals—has recently been the subject of intense debate and even outrage. This furor over pronoun use feels very current, but linguistic scholars will tell you that the disagreement is almost 700 years old[1]. [BM1] The initial emergence of controversy was purely grammatical: English is lacking an important part of speech. Pronouns are paired with antecedents, the more specific nouns that precede them. But a problem arises when a sentence uses a singular gender-neutral common noun (like student, official, or customer) because English does not have a singular gender-neutral pronoun to pair with these words. The available pronouns that agree in number with our many gender-neutral common nouns ask you to assume that students are all either male or female (“he” or “she”). [BM2] The pronoun debate that we are seeing litigated in the court of public opinion, however, isn’t really a grammatical debate so much as a social one. This is also not new. Pronouns have found themselves at the center of  a values debate since the suffragist movement almost 200 years ago.

In the absence of a singular gender-neutral pronoun, grammarians decreed that masculine pronouns—he, him, and his—could also be used generically to refer to both males and females. But this choice amounted to more than a fussy rule for grammar sticklers. Dr. Dennis Baron, professor Emeritus at the University of Illinois and author of What’s Your Pronoun,[BM3]  cites the 1871 Dictionary Act  as the moment the generic “he” was written into law: “[W]ords importing the masculine gender may be applied to females [Statutes at Large, 41st Congress, session III, ch. 71, p. 431]” (qtd. in Baron “On the Birthday”).[BM4]  The dual use of a pronoun was not unheard of (“you”, for instance, can be both singular and plural), but this dual use did create ambiguity, especially with regard to the interpretation of the law. Of particular importance is the word “may,” which signified that the courts had discretion in determining when the use of “he” applied also to women, and when it did not. [BM5]

Perhaps not coincidentally, prior to the passage of the Dictionary Act, in 1869 suffragists argued that if the use of the generic “he” in criminal law applied to women, then the generic “he” in voting law should apply to women as well (Baron, “On the Birthday”). [BM6] Given that 19th amendment would not be ratified for another 60 years, this argument was clearly unsuccessful at the time. Because “he” could be either masculine or generic, it was up to our courts to interpret its use.  Surprising no one, the courts determined that “he” in laws regarding punitive measures like jailable offenses and paying taxes applied generically, while “he” in laws related to the right to vote, the right to practice law, and the right to run for congress (among many others) applied only to men. This uneven application of the generic “he” reveals something important about the pronoun debate: It has never been a debate about grammar.  The rules regarding pronouns are inextricably tied to issues of gender and power, rights and equality. [BM7] But the grammatical inconvenience of this missing part of speech resulted in calls for a gender-neutral singular pronouns predating even the suffragist movement. The singular “they” first appeared in writing in 1370 and in 1792, a Scottish economist suggested adopting “ou” as a gender-neutral singular pronoun (Baron, “Pronoun Showdown”).         Many alternatives have since been proposed, but none have had staying power.

In the absence of a widely accepted alternative[BM8] , students were instructed, as noted above, to default to male singular pronouns in these cases. For example, if a student wishes to be excused from physical education, he must submit an appeal to the school board. The generic “he,” hilariously described by Baron as “the grammatical equivalent of manspreading,” dates back centuries, and the reason for its adoption had little to do with clarity (“Pronoun Showdown”). Baron quotes John Lyly on this subject in 1567: “The Masculine Gender is more worthy than the Feminine, and Feminine more worthy than the Neuter” ( qtd. in Baron, “Pronoun Showdown”).

More appalling than this reasoning is the fact that this solution remained the standard until the late 20th century, when the rule evolved into the more inclusive but much clunkier “he or she.” E.g. If a student wishes to be excused from physical education, he or she must submit an appeal to the school board. Even as late as 1985, though, only about half of editors surveyed preferred “he or she” over the generic “he”(Watkins).  Beyond syntactic awkwardness, this option is also not fully inclusive. “He or she” excludes those who fall outside the gender binary.

Another option is to change the structure of the sentence to avoid the problem. E.g. If students wish to be excused from physical education, they must submit an appeal to the school board. However, writing around the problem is not always possible. The fact is that the lack of an ungendered singular pronoun is a failure of the English language, and the question of how to deal with it continues to be polarizing, with no option whipping up a fury otherwise unheard of in discussion of grammar than the option to adapt “they” to be both plural and singular.[BM9]

Critics of the use of the singular “they” have existed since its inception. Baron notes that in 1794, after being criticized by writer Don Alonzo for using the singular “they,” writers of the offending passage offered this arch reply: “With regard to our using the plural pronoun “them” . . . — as we wished to conceal the gender, we would ask . . . Don [Alonzo] to coin us a substitute”(Baron, “Pronoun Showdown”). Aside from a feeble call for change in The Atlantic in 1879 (Baron, “Pronoun Showdown”), the writing community seemed to side with Mr. Alonzo. As of 1985, newspaper and magazine editors surveyed continued to be overwhelmingly against the use of the singular “they” (Watkins).[BM10]

The tide appears, at long last, to be turning. Indeed “they” was the Merriam-Webster word of the year in 2019 (“Word of the Year”). [BM11] Dr. Baron argues that the singular “they” is ideal, as it sounds natural enough that many people accidentally use it already and the larger writing community agrees. The Washington Post, which follows its own style guide, was an early adopter, switching to the use the singular “they” in 2015 (Andrews). The MLA and APA eventually followed suit to fully endorsed the singular “they” as well.  The Associated Press, while still recommending writing around the need for a singular gender-neutral pronoun, has also okayed its use (Andrews). The Chicago Manual of Style stops short of a full endorsement, and like the AP suggests write-arounds (“Chicago Style”). They are unanimous, however, in their endorsement of using the singular “they” in reference to specific people. This is important:  If a person’s preferred pronouns are they/them, the stylebooks agree that the use of the singular “they” is not just polite but correct.

There are, naturally, still detractors. For those who argue against the singular “they” on grammatical grounds, I think it’s safe to say they have missed the point.  First, the English language is evolving and has always done so. The rate at which words disappear from our lexicon is eclipsed only by the rate at which new words are added. An average of 800-1000 new words are added to English dictionaries every year (“Updates to the OED”). Some of this has to do with objects we no longer use (like floppy disks), and some words simply become unfashionable (like groovy). Old English bears only a passing resemblance to its youngest descendant, and even early modern English seems foreign enough to induce genuine anxiety in teenagers toting Shakespeare home in their backpacks each night. [BM12]

And the changes are not limited to our vocabulary—our grammar changes, too (albeit more slowly). “You” for instance, was initially plural (along with “ye”, while “thee” and “thou” were the corresponding singular pronouns). Eventually “you” became singular as well, and supplanted the other pronouns (Yagoda). It is hard to understand how anyone who studies language enough to harbor strong opinions about grammar could find merit in the argument that English shouldn’t change.

Second, our language is a reflection of our culture, and this is where the real debate lives. The generic “he” emerged as a way of subjugating women, deemed “less worthy” so many years ago. It was used to write women out of the law and out of participation in public life. Today’s debate is a new version of the same song[BM13] . When critics of the singular “they” insist on limiting us to “he” or “she,” it is an attempt to write everyone who falls outside of the gender binary not just out of participation, but out of existence.

[1] Dr. Dennis Baron in “Pronoun Showdown” argues the first use of the singular “they” appeared in writing in 1370, and the first call for an alternative pronoun appeared in 1792.

[BM1]This is an example of an explanatory footnote, which MLA recommends using sparingly.

[BM2]Introductions are serve two purposes: 1) to introduce any relevant background and 2) to establish the argument. This section provides important explanation and context.

[BM3]When using a source for the first time, best practice is to fully introduce the source to establish it as credible.

[BM4]Sources that reference outside research can be cited with the addition of “qtd. in” in the parenthetical citation.

[BM5]An important part of analysis is often looking closely at the impact of language choices. This analysis takes a closer look at the significance of the word “may” in the preceding evidence.

[BM6]When you’ve used two sources by the same author, include the title along with the author’s last name.

[BM7]Analysis should do more than summarize the information in the quote. In this example, the analysis connects the way pronouns are treated in law to the central argument about the social implications of grammatical choices.

[BM9]The end of this paragraph serves as a transition to the next. The writer introduces the issue in preparation for the following paragraph, which explains how long the issue has been polarizing.

[BM10]Rather than looking at evidence in isolation, try to synthesize it in a way that highlights the relationship between multiple sources.

[BM11]When a source has no author, cite the title (or an abbreviated version of the title).

[BM12]While using evidence from experts is important, it’s also valid—and important—to use your own knowledge or reasoning to make a point. In this case, the writer doesn’t need an expert to tell them that the English language has evolved. She can tell just by looking at old, middle, early modern, and modern English.

[BM13]When writing argumentative rather than expository writing, the evidence you introduce should be more than informational. In this case, the writer introduced the way the generic masculine was used to exclude women in law for the purpose of drawing a parallel later in the argument to reasons behind today’s debate.

“Chicago Style for the Singular They.” CMOS Shop Talk: From the Chicago Manual of Style. 3

“Word of the Year: They.” Merriam-Webster’s Words of the Year. 2019. https://www.merriam-webster.com/words-at-play/word-of-the-year-2019-they/they.

Yagoda, Ben. “’You’, ‘Thou’ or ‘Ye’: An Outline of the Modern Usage of the All-Purpose Second Person in English.” Principa Toscuola. 9 July 2019, https://principatoscuola.it/you-thou-or-ye-an-outline-of-the-modern-usage-of-the-all-purpose-second-person-in-english/. When You Catch an Adjective, Kill It: The Parts of Speech, For Better an/or Worse, Broadway Books, 2007.