How do dangling, misplaced, limiting, or squinting modifiers cause confusion in sentences? How can I avoid these modification problems? 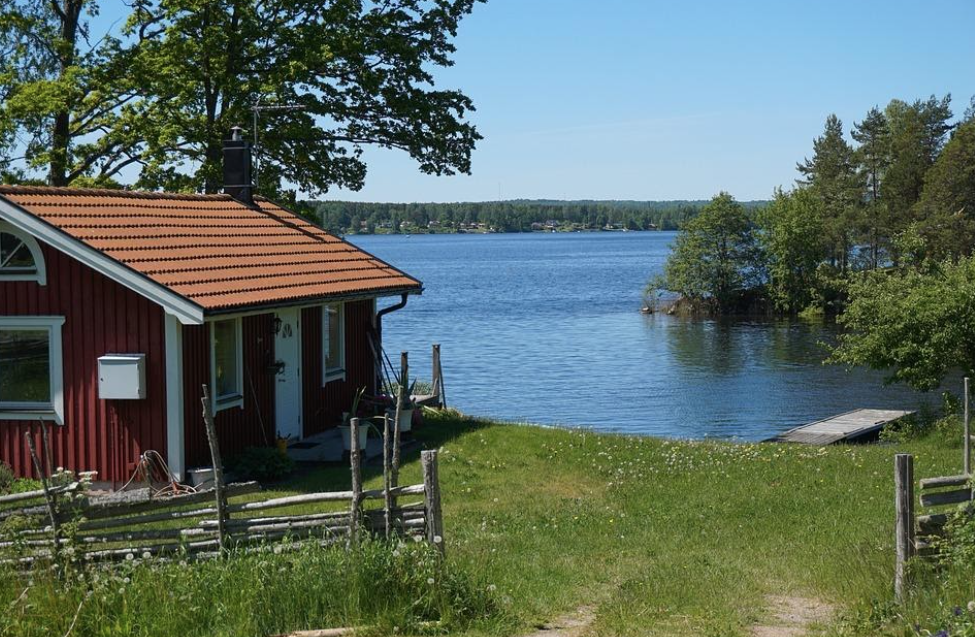 Modifiers change the sentence meaning. Photo of house on a lake.

Modifiers are words, phrases, or clauses that describe anotherword in a sentence. Modifiers change the sentence meaning.

Modifiers change the meaning of a sentence by adding details and qualifying information. Generally, English places modifiers as close to the word (or group of words) they describe as possible.

When modifiers are placed in their proper position in a sentence, they add details and qualifying information that help readers, listeners, users . . . better interpret the text.

When modifiers are placed in positions that confuse the sentence’s meaning, they may be called an unclear or awkward. Or, people may say it’s confusing, vague, and just doesn’t make sense.

If you think about modifiers as being similar to adjectives, it may help you to understand their function in a sentence. For example, you may remember that an adjective describes something about a noun. In this example, this real estate advertisement uses several adjectives in bold to describe the noun (house):

This quaint and cozy little 1940s house is located in a prime location in the Seminole Heights community:

Used correctly, modifiers can help you to create more sentence variety and details in your text. Consider the following sentence, which was written as part of a scholarship application:

While visiting Puerto Rico as part of my school’s service learning program, I learned about a non-profit organization that educates people about overfishing.

In this example, the writer uses one sentence instead of several to explain relevant information about both her academic career and her particular interest in environmental issues. Notice that the modifier in bold describes the nearby subject, which is the pronoun I.

Dangling modifiers happen when the opening phrase of a sentence should share the sentence’s subject, but doesn’t. This disconnect can make the sentence confusing or even humorous:

“At seven years old, my father taught me how to play guitar.”

Because the modifier is immediately followed by “my father,” which is the subject, the sentence actually says that the writer’s father was seven years old when he gave her guitar lessons. Clearly, this is not what the writer intended. However, moving the modifier around in the sentence, as you can to correct misplaced modifiers, will not fix this error. Instead, an effective way to correct the problem is to change the modifier to a dependent clause:

CORRECT: When I was seven years old, my father taught me how to play guitar.

To apply for graduation, the form must be filled out in its entirety.

CORRECTION: To apply for graduation, please fill out this form in its entirety. [Note that this imperative sentence, also called a command, has the implied subject “you.”]

I gave the old coins to my nephew I keep in a safe.

Although the sentence sounds like cause for alarm, its error can be fixed by moving the modifier, which is in bold, closer to the word it should be modifying. We can assume that the writer does not keep any family members in a safe, so we can just rearrange the sentence for clarity:

CORRECT: I gave the old coins I keep in a safe to my nephew.

Example: Walking across the hardwood floor, the porcelain statue slipped from my hand.

Was the statue walking? Probably not, but the sentence implies that it was. Here’s what the writer actually meant: CORRECTION: Walking across the hardwood floor, I dropped the porcelain statue.

Example: As a nominee for the award, your name will be prominently displayed in the hall.

This sentence implies that “your name” will be the nominee. Well, no. The actual person (and not merely the name of the person) will earn the nomination.

Stranded outside in the rain, Sara’s door refused to budge.

This sentence implies that “Sara’s door” was stranded outside in the rain.

CORRECT: Stranded outside in the rain, Sara could not budge her door.

As a new hire, I would like to welcome you to the company.

This sentence implies that the person speaking as “I” is the new hire. However, why would a new hire be welcoming somebody new? This scenario seems backward. More likely, the speaker (“I”) is already established with the company and is welcoming somebody (“you”) who is new.

At first, almost, exactly, hardly, just, merely, nearly, simply, only—these words limit the meaning of another word, phrase, or clause in the sentence. Thus, they may be referred to as Limiting Modifiers.

Modifiers change the sentence meaning. Limiting modifiers get their name because they specify conditions that restrict the word they are modifying. This error often occurs with words like “only,” “just,” and “almost.” Here is an example:

In this sentence, the speaker doesn’t like the phone and believes there are better options available.

In this sentence, the speaker likes the phone—and also feels that it has more benefits than just being the “best,” like maybe it’s also the cheapest or newest.

My sister only eats the green candies.

These examples demonstrate how moving a word in a sentence changes the meaning of the sentence. Consider, for instance, how the meaning shifts below as the placement of “only” shifts in the sentence.

Also, consider the shifts in meaning in the following sentences. Note the word only modifies the next word or phrase in the sentence:

Only John said he loved Susan.

John was the only one who said it.

John only said he loved Susan.

Perhaps he didn’t mean it?

John said only he loved Susan.

Apparently, Susan is the only one for John.

Note: If “only” is the final word in the sentence, it refers to the previous word or phrase.

A Note on YOLO

The phrase YOLO has been used as a short version of “You only live once.” The users of this phrase think that this sequence of words suggests that they are living in the moment–because you only have one to live, live in the moment, seize the day (carpe diem), etc. This sentiment, however, is not what YOLO tells the listener. Think of how the word “only” works–it modifies the word after it in the sentence.

You only live once.

This sentence says that the only thing you will do once in your life is live. Everything else in life, you must do twice. Skydiving? Do it again. Awful breakup? Twice. YOLO tattoo? Get two of them.

This new device just costs $50. (This placement is awkward and unclear.)

This new device costs just $50. (This sentence implies that the price is surprisingly low.)

I was just driving slightly over the speed limit, but I got a ticket, anyway. (The placement is awkward and unclear. When did this happen? Recently? Or, does this mean that the speaker was only driving—not texting, not on the phone, etc.?)

I was driving just slightly over the speed limit, but I got a ticket anyway. (Perhaps the driver was clocked at 58 mph in a 55 mph zone.)

I was just calling you, and I didn’t expect you to be offended. (The call isn’t a big deal.)

I was just calling you, and then you walked into my office. (The call happened recently. Or, it could also mean that the call isn’t a big deal.)

I was just now calling you, and then you walked into my office. (The call happened recently.)

Another kind of error, the squinting modifier, occurs when the writer places a modifier between two words or grammatical structures without clearly modifying either of them. Notice how modifiers change the sentence meaning.

The celebrity the audience expected enthusiastically entered the room.

The girl I dated recently was in a Broadway show.

Opening phrase of the sentence: sprinkled with coriander

Subject of the sentence: kids

Ex: Abraham Lincoln wrote the Gettysburg Address on a train on the back of an envelope.

How can a misplaced modifier be replaced correctly?

Let’s look at an example:

Sentence with a misplaced modifier: The kitten took a nap in a padded basket with a collar around its neck.

Sentence with a properly-placed modifier: The kitten with a collar around its neck took a nap in a padded basket.