Distinguishing between Main Points and Sub-claims 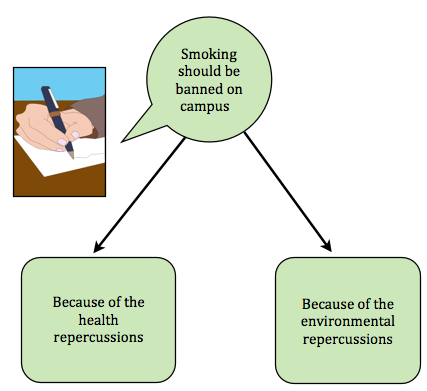 When reading another writer’s argument, you need to distinguish between

Being able to recognize the difference between main points and sub-claims will prove incredibly useful when composing your own thesis-driven essays.

As you may know, a writer’s thesis articulates the direction they will take with their argument.

Let’s take a look at the following diagram:

This diagram translates into the following organizational plan:

Points (A) and (B) will be explored in body paragraphs, will likely form the topic sentences of those body paragraphs, and will be supported by more claims specific to each point, or sub-claims. Let’s return to the previous diagram and see what happens when we include sub-claims: This diagram translates into the following organizational plan:

I.    I argue that smoking should be banned on campus.

A.    Smoking should be banned on campus because of the health repercussions.

B.    Smoking should be banned on campus because of the environmental repercussions.

1.    The cigarette butts are harming animals on campus.

2.    The cigarette ash is killing the grass in the campus green areas.

Then, the writer includes evidence to support each sub-claim. For instance, if I assert that “smoking affects students with allergies,” the reader would ask, “What support do you have for that claim?” And the writer might cite a poll taken on campus proving that students with allergies have suffered more when walking through smoky areas. To support the sub-claim that “smoking affects students suffering from asthma,” the writer might cite a report released by Student Health Services connecting the increase of on-campus asthma attacks to on-campus smoking. Those studies function as evidence to support two of the author’s sub-claims. Other evidence would be necessary to prove the validity of the writer’s other sub-claims.

Whenever you, as a reader, come across an assertion in a thesis-driven text, ask yourself, “What support is the writer offering to back this claim?” You can then chart the points made by the writer by filling in the answers you locate when reading the text. If a point is missing, take note of that, because the point’s absence might very well undermine the author’s argument. Similarly, as a writer, whenever you make an assertion, ask yourself, “What support can I offer to back this claim?” Then bolster your argument by adding supporting claims and evidence as needed.