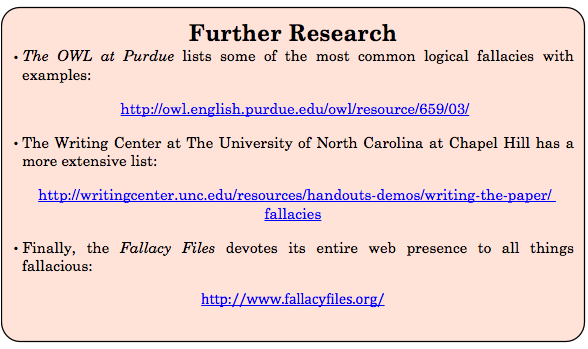 Logical Fallacies refers to errors in reasoning that lead to faulty conclusions.

“All men are mortal;
Socrates is a man:
therefore, Socrates is mortal”

is both valid and sound. Its premises are true, and the conclusion is undeniable given an understanding of the definitions of the terms.

Plato’s famous syllogism is an example of a deductive reasoning; that is, it relies on a process of reasoning from general statements of common knowledge to arrive at a specific and logically consistent conclusion. But most of the arguments you will encounter in college and in life in general take the form of inductive arguments, which move in the opposite direction: from statements of specific instances toward a general conclusion. For instance, if I say that the sun has always risen in the morning, and then conclude that the sun will therefore rise tomorrow, I have formulated an inductive argument. Notice, however, that my conclusion is not necessarily valid given the definitions of the terms. I can be fairly confident that the sun will rise tomorrow in the morning, but I can’t be absolutely certain of it. After all, the sun might go supernova overnight.

Of course, given the fact that astronomers suggest that the sun isn’t likely to die for at least another four billion years, my inductive argument’s lack of absolute certainty shouldn’t bother anyone. The point is that because my argument relies on a specific instance known to be true (“the sun has always risen in the morning”), and then moves to a general conclusion (“the sun will therefore rise tomorrow in the morning”), the possibility that I have committed a logical fallacy in the course of my argument is relatively high. That is, somewhere in the chain of reason leading from the premise to the conclusion, I might have unknowingly violated the internal logic my argument needs in order to succeed. The term “logical fallacy” refers to the point—or points—at which that chain of reason snaps, rendering the conclusion invalid.

Not all inductive arguments commit logical fallacies. Indeed, most of the argumentative texts you will encounter in college manage to avoid such faulty reasoning, mainly because successful authors—i.e., those who publish—have learned how to avoid such pitfalls. They know that inductive argumentation is vulnerable to logical fallacies, not only because such arguments start with specific premises and move to general conclusions, but also because their premises so often rely on human values and abstract concepts. Furthermore, poorly constructed inductive arguments often make statements that on the surface appear plausible, but after consideration or further research reveal inconsistencies or outright falsehoods.

For example, let’s say that I’m writing an essay attempting to prove that same-sex marriage is wrong and should not be allowed. One of my premises suggests that if same-sex marriage were legal, pretty soon humans would be marrying their dogs. This statement commits a number of logical fallacies, but the most egregious of them is called the slippery slope, which describes a situation in which a generally unacceptable situation (humans marrying dogs) is proposed as the inevitable outcome of a policy change (allowing same-sex marriage). But no evidence exists that such an outcome will in fact obtain. Furthermore, the argument commits a variant of a categorical mistake, because dogs and humans do not belong to the same species; a dog cannot consent to or decline a marriage vow, and marriage legally requires that both parties are willing and able to provide consent. A reader who accepts such arguments at face value simply cannot make an informed decision about the issue at hand. Logical fallacies not only result in bad writing; they also translate to irresponsible citizenship.

Many more logical fallacies exist than can be included in this article. In the sections that follow, you will find explanations of some of the more common examples as they play out within the context of the four rhetorical appeals. Further research in the library and on reliable websites will yield an inexhaustible amount of information on the various logical fallacies (see some example websites below). As you read assigned texts and write your own argumentative essays, you should constantly test the arguments they contain, examining the premises and their links to one another and to the conclusion. Learning to recognize logical fallacies is a skill essential to college-level writing and to critical thinking in general.

What is a logical fallacy? A “fallacy” is a false notion or belief. “Logic” refers to the soundness of an argument. According to classical rhetoric, all of an argument’s premises must be true, and the argument must be valid in order to be considered sound. A logical fallacy disrupts the logic of an argument, either by making one of its premises untrue or undermining its validity. In other words, it makes an author’s argument nonsensical and unsupported.

Here are some common examples of logical fallacies, complete with examples and explanations:

Ad hominem: An ad hominem attack attempts to discredit an argument by making personal attacks against the speaker directly.

Example: Salil Shetty, the Secretary General of Amnesty International, isn’t even American. So why would Americans listen to his ideas about accepting refugees from Syria?

Explanation: Rather than looking at the strengths and weaknesses of Amnesty International’s specific points about accepting Syrian refugees, the author claims that its Secretary General is “un-American” and, therefore, untrustworthy. This claim distracts from their actual point and detracts from the soundness of their argument.

Ad populum: In this logical fallacy, a writer appeals to broad abstract ideas, such as community, patriotism, religion, etc.  rather than focusing on the argument. Think of it in terms of this construction (the word order is just an example and will not be followed exactly in all ad populum appeals): “If you do/don’t support ________ (the issue at hand), you’re not a real _____ (term appealing to an abstract concept or idea).

Example: Real Christians should reject the commercialization of Christmas.

Explanation: In this example, the author claims that “real” Christianity is synonymous with rejecting gift-giving over Christmas, implying that it is impossible to participate in the religion authentically without doing so. This argument often creates false dilemmas for people that might identify with a certain group–in this case, readers who identify as Christian may feel forced into a decision they don’t actually have to make.

Begging the Claim: An author who employs the “begging the claim” tactic validates his or her argument within the claim itself rather than making logical arguments to support it.

Explanation: The author’s main claim is that college students shouldn’t be required to take humanities courses. In developing this claim, we can assume that the author will be attempting to prove that these courses are “boring” and “useless.” However, the author has already put these terms into his or her claim, thus already assuming them to be true without having to prove these contentions through solid argumentation.

Circular Argument: An author making a circular argument restates the argument rather than supporting or further explaining it.

Example: Mashed potatoes are superior to baked potatoes because they are better in every way.

Explanation: Here, the author does not give any reasons as to why mashed potatoes are superior to baked. Rather, he or she repeats the claim by saying that they are better in every way, which is pretty much the definition of superior.

Either/Or (False Binary or the Fallacy of False Oppositions): In an either/or logical fallacy, a writer reduces an argument into two opposing sides when the issue is in fact much more complicated and could be represented by many different options.

Example: The government should either extend amnesty to all illegal immigrants or immediately deport all of them.

Explanation: This false binary conclusion ignores all of the different options regarding immigration, such as amnesty for children brought to the United States and focusing on deporting violent criminals rather than law abiding immigrants. Instead, it misleadingly reduces the entire debate into two choices.

Example: (After reading one article on the subject) School uniforms without a doubt positively contribute to academic success.

Explanation: One should not come to a definite conclusion after exposure to such limited evidence. The author of the paper should read widely on the topic and acknowledge that there are many different points of view before making a determination.

Genetic fallacy: Often overlapping with the ad hominem fallacy, when using a genetic fallacy, a writer makes an assumption about a person, thing, or idea based on its origin or makeup.

Example: All people from New Jersey are obnoxious.

Explanation: In this example, the author assumes that a geographical origin has an effect on a person’s character. While some people from New Jersey may indeed be obnoxious, their origin and character are not necessarily connected.

Moral equivalence: In this logical fallacy, an author attaches an exaggerated, often negative moral significance to a more minor incidence.

Example: My professor gave me an F on my homework assignment! He’s so evil!

Explanation: Here, the author accuses the professor of being evil for assigning a failing grade. Usually, true evil is associated with other, more serious crimes against humanity. Giving a low grade on an assignment with a set of standards does not necessarily constitute an evil nature. If you see a reference to Hitler or the Holocaust, it’s most likely a moral equivalence fallacy.

Post hoc ergo propter hoc: This is a Latin phrase that means “After this, therefore because of this.” It assumes that because Event #1 happened first, then Event #2 (and possible #3, #4, etc) happened as a result of Event #1. This is considered a logical fallacy because chronologically occurring events are not necessarily related. Unless there is solid evidence presented, there is no reason to assume the events are related.

Example: I used a new sunscreen at the beach yesterday, and now I am itchy all over. I must be allergic to the new sunscreen.

Explanation: Here, the author assumes that he or she is having an allergic reaction to sunscreen. However, without trial and error, there is no way to prove that the sunscreen causes the allergic reaction. The itching could have resulted from sand fleas at the beach, a food allergy, switching to a new laundry detergent, etc. Until the cause is researched and isolated, it is illogical to assume that the new sunscreen caused the itching.

Red Herring: A writer who uses this tactic diverts the conversation to a completely unrelated issue and does not address the arguments at hand.

Example: If we cut taxes for the middle class, businesses will be overly taxed and won’t be able to create new jobs.

Explanation: In this example, the writer is attempting to create a diversion from middle class tax cuts by bringing up the issue of taxes on businesses. Even though these issues could per chance be interrelated, the writer does not sufficiently address the question of lower taxes for the middle class.

Example: If we don’t pass stronger gun laws, it will be legal for children to bring guns to school.

Explanation: This author assumes that a failure to pass stronger gun laws will lead to a “downward spiral” of permissiveness towards guns that will eventually allow children to legally possess and bring firearms to school. It is illogical to make this assumption that one event will cause all of the other events necessary to bring about this conclusion.

Straw man: This logical fallacy is twofold. First, an author reduces his or her opponent’s complex argument into an overly simple one. Second, the author then contends against the simplified opposing position rather than addressing the different points and arguments that the other side has made.

Example: School funding should be contingent on standardized test scores. Opponents of this practice don’t want our children to be successful in school.