Mindsets are ways of perceiving, interpreting and acting in the world. The mindsets you hold, consciously or subconsciously, shape how you feel, think, and act; your sense of identity and belonging; what you believe is possible. Review research and scholarship on mindset. Learn to coach yourself, to avoid unnecessary negativity and anxiety when writing. Explore how to adopt the habits of mind employed by successful writers, entrepreneurs, and product managers. 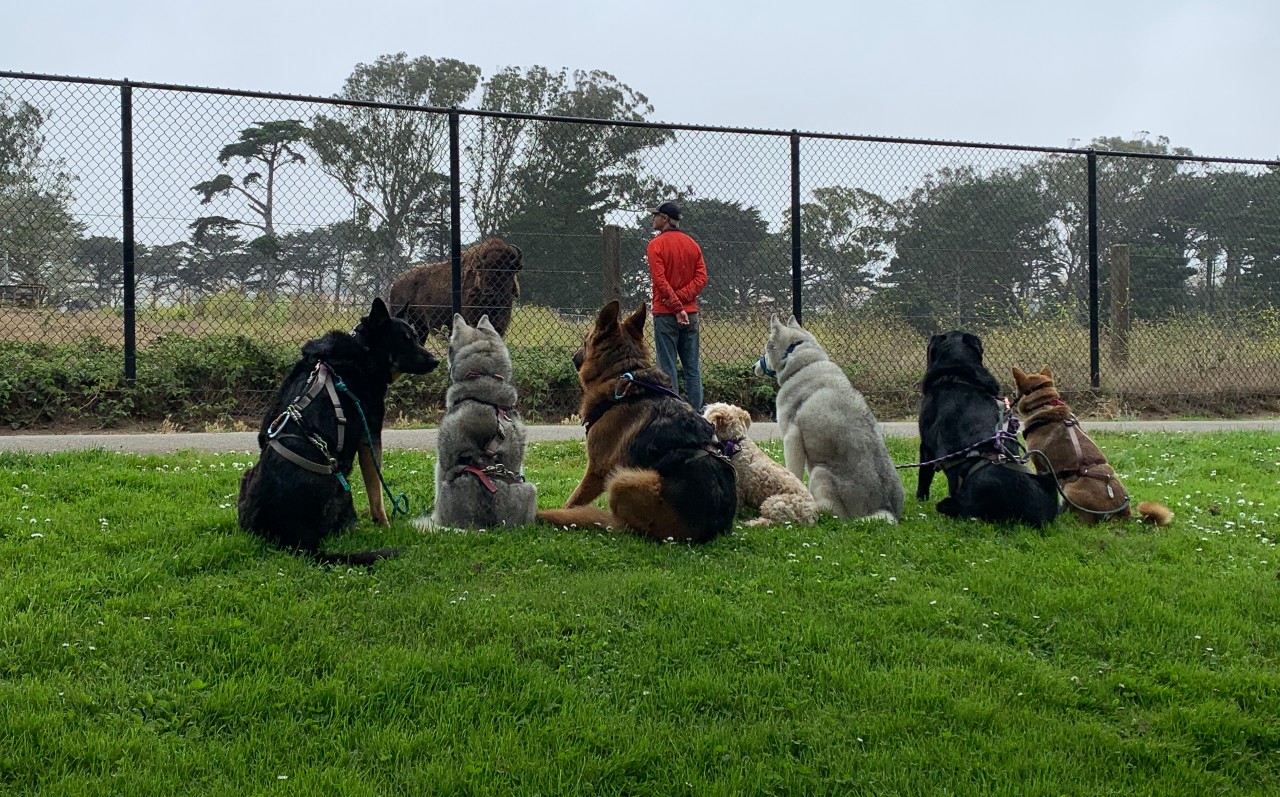 A mindset can be cultivated over time. Mindsets are practices informed by purpose. Note, e.g., how this trainer has trained the dogs to line up in single formation to say hi to the buffalo. Photo Source: Joe Moxley

Mindset can be learned: just as these dogs have learned to line up in the I formation when visiting with the buffalo

Mindsets are ways of perceiving and acting in the world. The mindsets we hold, consciously or subconsciously, shape

The mind is everything. What you think, you become.

Why Does Mindset Matter?

A writer or speaker’s mindset plays a powerful role in their success or failure. People with a growth mindset, for instance, are more likely than people with a fixed mindset to respond positively to tough critiques and to challenges, more generally.

We develop mindsets as we encounter other people, experiences, events, issues, and objects. We may mimic the mindsets of others. We may join discourse communities that ascribe to particular mindsets and narratives. From informal research and formal research, empirical observation, and reading, we develop representations of how the world works. Over time, we associate feelings and behaviors with recurring rhetorical situations, and, accordingly we compose adopt, draft, and revise personas, rhetorical stances, and arguments.

As a rhetor — a speaker or a writer — you invariably develop habitual ways of interpreting and responding to new rhetorical situations based on your past experiences. In part, our personalities, our identities, are defined by the mindsets we hold. Our character–our sense of self–is defined by the mindsets we hold true and dear to our hearts. Likewise, sometimes we describe our friends and work colleagues based on the mindsets they espouse. For instance, when a friend launches an entrepreneurial venture, we might say “Wow, Yolanda has such a business mindset.” Or when someone is afraid to travel, go on a roller coaster, or be adventurous, we might say, “Ah, Tony’s afraid of his own shadow.” And then there’s always Eeyore: “He’s just so damned negative!”

Ultimately, the quality of your texts and your apprenticeship as a writer isn’t your teacher’s responsibility, your school’s responsibility or even the responsibility of your employer. Your mindset drives the writing process. No one–a boss or a teacher or a parent–can force you to achieve your potential as a writer. Punishments or extrinsic rewards can only go so far. At a certain point, you (the writer, speaker, knowledge maker . . . ) must assume ownership over their own development.

According to the Council of Writing Program Administrators, the National Council of Teachers of English, and the National Writing Project (2011), curiosity, openness, engagement, creativity, persistence, responsibility, and flexibility are habits of mind that are “essential for success in college writing”:

Your mindset, your attitude and psyche, influences how you communicate. You may choose to affirm and invest in yourself; assume responsibility over your learning and development as a writer. Adopt a growth mindset, intellectual openness, metacognition and self-regulation, professionalism and work ethic, and resilience.

You can best meet your potential as a communicator by

People may be consciously aware of some of the mindsets that guide how they interpret and evaluate the behaviors of other people, events, and issues. For instance, someone may recognize they have a social mindset–that they enjoy meeting new friends and exploring new communities. Or, perhaps someone recognizes they are a bit cheap when it comes to spending mone.

Sometimes being unconscious of one’s mindset(s) is fine or even helpful, especially when the mindset leads to healthy decisions and good outcomes. For instance, consider how someone with a healthy-lifestyle mindset avoids hitting the dessert table at the buffet table. They may not even notice the chocolate mousse pie or decline it based on habit.

Sometimes, however, not being reflective about one’s mindset can lead to faulty communications.

The problem with Mindsets is that they are working hypotheses, yet sometimes we drink the kool aid and consider them to be substantiated knowledge claims. It’s possible for people to embrace a mindset so strongly that that may overlook contrary evidence. Sometimes, as human beings, we engage in confirmation bias — i.e., we ignore disconfirming evidence and selectively perceive evidence that confirms our mindset or argument. To one degree or another, we all share an urge at times to prove our position. This can lead to close-mindedness, the antithesis to rhetorical reasoning and critical literacy.

As an example of this dynamic, consider how people’s mindset — in this case that the assumption that U.S. Democrats were exaggerating the coronavirus for political purposes — led Fox News journalists to underestimate the significance of the coronavirus when it first emerged in 2020:

How the mind works, how people change their minds (persuasion), how people of like-minds cluster together, how people strive for consensus in group situations (group think)–these topics have fascinated researchers across disciplines for generations. Cognitive psychologists, learning theorists, communication researchers, management and leadership specialists have all researched the traits that lead to Mindset.

Researchers have proposed a variety of models to account for how people can break through Mindsets to become more open, growth-orientated, and wiser. The work of Carol S. Dweck, a psychology professor at Stanford, has been particularly transformative. Dweck’s hypothesis is that people’s orientation to learning (whether they hold a Growth Mindset or a Fixed Mindset) predicts their learning and success in school and work contexts more than any other factor.

The National Research Council (2012) and The National Academies of Sciences, Engineering, and Medicine (2017) are curious about the correlations between intrapersonal competencies (e.g., grit, perseverance, and self-regulation) and learning, retention in school, and professional success.

However, from the context of personal anecdote, teacher research, case study, or qualitative research, Writing Studies has long been interested in intrapersonal competencies even if that scholarship was not officially subsumed under the umbrella of that term. Historically, different Communities of Practice (Fiction Writers, Teacher-Researchers,, and Expressivists have been curious about the habits, attitudes, and strategies of successful writers. For example, based on his experience as a graduate student, Peter Elbow wrote eloquently about his personal discovery of the power of freewriting. Sondra Pearl explored ways writers work with “felt sense”–an inchoate, prelinguistic feeling about what one was trying to say. Some qualitative researchers have followed small groups of students throughout their college courses , e.g. Carroll, 2002; Beaufort, 2007; Ebest 2005; Wardle, 2009; Fraiberg, 2010; Nowacek, 2011; Driscoll & Wells, 2012; Wardle & Roozen, 2012). And recently there has been a great deal of interest  in using interviews, surveys, and observations of writers and their texts to better understand the role of self-regulation and self efficacy on writing and the transfer of learning.

Council of Writing Program Administrators, the National Council of Teachers of English, and the National Writing Project (2011). Framework for Success in Postsecondary Writing. http://wpacouncil.org/aws/CWPA/pt/sd/news_article/242845/_PARENT/layout_details/fals

Driscoll, D. L., & Wells, J. (2012). Beyond knowledge and skills: Writing transfer and the role of student dispositions in and beyond the writing classroom.

Ebest, S. B. (2005). Changing the way we teach: Writing and resistance in the training of  teaching assistants. Carbondale, IL: Southern Illinois University Press.